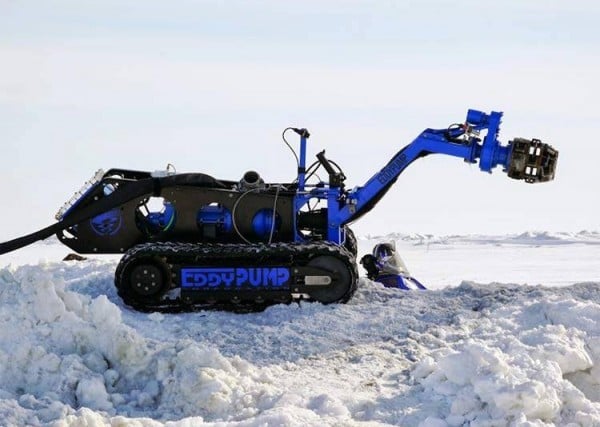 Underwater gold mining for a long time has been a very labor intensive and often low yielding process.  Divers are often put into freezing cold and often dangerous waters in order to pump gold rich sands to make their fortunes.

Currently the biggest issues stem from the inability to operate at depths greater than 25 feet, the dependency on divers, inefficiency of pumps, and the environmental impacts and conditions.

Recently EDDY Pump Corporation out of San Diego, CA was asked to come out to Nome, Alaska in order to showcase its gold mining solution on one of the most watched television shows on the Discovery Channel.

For the past 25 years EDDY Pump has been a world industry leader in innovative engineering development of the most state-of-the-art patented pump and dredging technology. The technology has been utilized in industries as vast as the US Navy to oil, mining, dredging, wastewater, chemical and many others.

With such a diverse industry background, EDDY Pump stepped up to the challenge by sending out the Sub-Dredge. This remote-operated submersible dredge is the answer to all pre-existing issues and restrictions that currently plague the underwater gold mining industry. It was developed in order to go where conventional dredging equipment would often fall short due to depth restrictions, operation and mobilization costs, inability to run remotely, environmental impact and lack of pumping capability.

The Sub-Dredge operates at depths exceeding 125 feet while safely being controlled by an operator on the surface. Weighing less than 5,000lbs and being 172-inch long x 62-inch wide x 60-inch tall, also makes it easily deploy-able in most applications at a low cost. The weight of the Sub-Dredge is dispersed over large rubber tracks that make it very rugged and able to deal with diverse conditions with only creating 3.3 psi of ground pressure. This design enables operation in dredging applications with potentially delicate liners such as concrete-lined canals and clay and poly-lined holding ponds. With such a low ground pressure, the Sub-Dredge is perfect for operation on ocean floor without sinking too far into the sand and getting stuck. 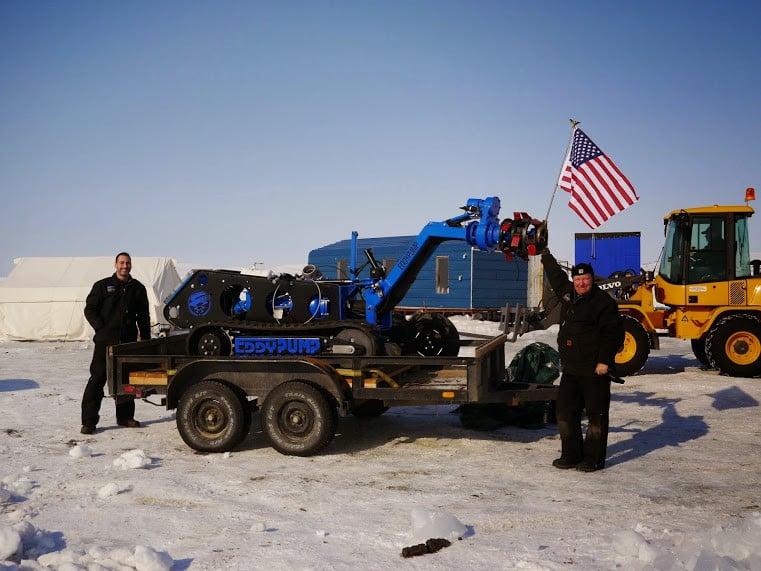 Utilizing a remote control the operator can precisely maneuver and operate the dredge with the utmost accuracy from a safe area on the surface.  This is possible with the assistance of GPS and acoustical positioning located on the Sub-Dredge along with high-resolution cameras and high- powered lights.   This is all then integrated into an RTK positioning software package.   Through this software the operator can easily see the exact position of the Sub-Dredge while also monitoring the pump’s flow rate and rpm and seeing a live video stream of the underwater operations.

Furthermore, with the ability of the Sub-Dredge to operate remotely and underwater, it greatly increases the amount of mining time that normally would be shutdown by bad tidal conditions or poor visibility.

The core of this technology is the patented EDDY Pump technology.  This is the only pump on the market that utilizes the principles of a tornado to create a synchronized eddy current.  This pump is not a centrifugal, positive displacement or vortex pump, but instead a highly efficient high solids and high specific gravity pump.  This translates to the ability to pump higher percent solids of material and capture the heavy specific gravity gold.   At the same time, the higher suction capability creates less turbidity, hence material being re-suspended in the water column and creating a possible environmental impact.

Based on the design of the EDDY Pump itself, the pump is virtually clog-proof when it comes to rocks or debris jamming inside of the volute.  The high tolerance of the pump allows any object up to 3 ½ inches to pass directly through without obstruction or harm to the pump.   This pass through ability leads to a significantly more amount of mining without shutdown due to clogging.

In order to keep up with the high suction capability of the EDDY Pump and constantly keep it fed with material, a bi-directional rotating guard is incorporated.  This rotating guard is located on the suction of the Sub-Dredge and comes with various configurations.  In order to deal with different materials and conditions, the basket can easily be modified for optimal performance.  For hard packed material such as compact sand, digging teeth are easily added to the rotating basket, which then breaks up the material for better pumping production.   In conditions where there is a lot of debris or clay-like material that can foul up the suction, a comb is added that cleans the basket on every rotation, minimizing any suction issues.

At the end of March the Sub-Dredge was sent to Nome, Alaska to mine for gold under the 5-foot thick ice of the gold rich waters of the Bering Sea. Previous to the Sub-Dredge, miners would cut a hole in the ice and send down divers with hoses to operate for short periods of time while utilizing low suction conventional centrifugal pumps.  This method on average would yield approximately 5 cubic yards of material an hour with divers only being able to operate for at most a few hours until they would have to be changed out because of exhaustion and harsh conditions. 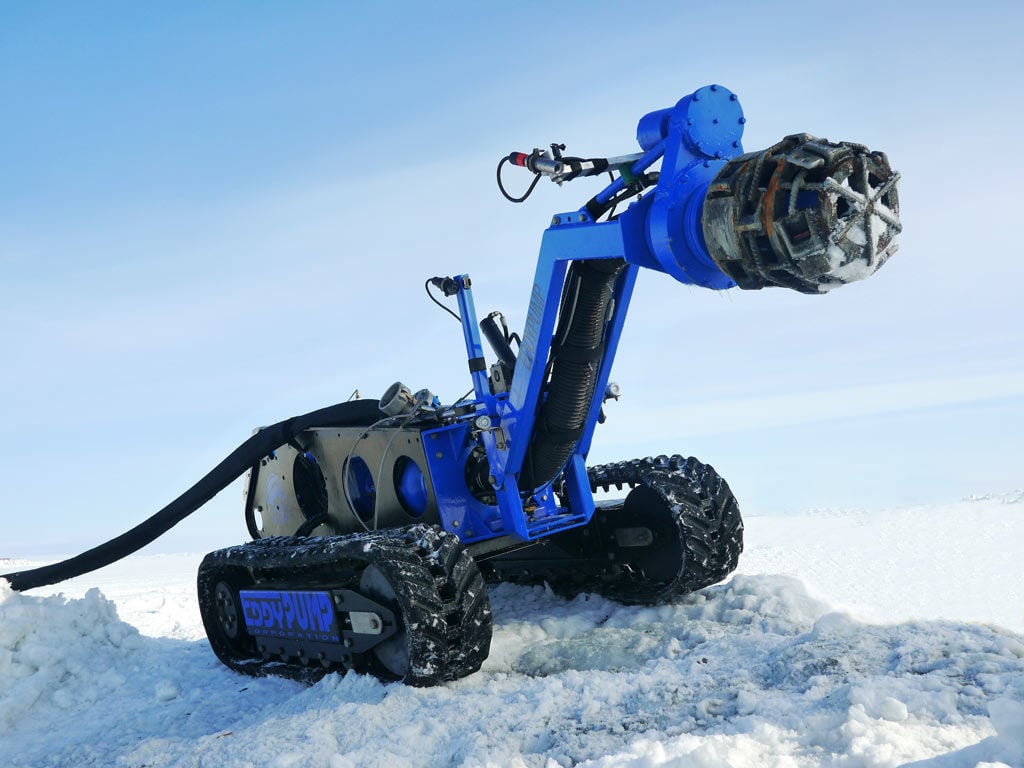 Within a few days of arriving in Nome, The Sub-Dredge was dropped into the Bering Sea to become the first remote-operated submersible dredge to gold mine under the ice.   The Sub-Dredge easily began traversing the rocky sea floor and began to pump material immediately.

The Sub-Dredge comes equipped with various size EDDY Pumps, but the one utilized in Nome was a 4-inch pump that had a flow rate of 700-1000GPM.   Due to the high suction capability of the EDDY Pump along with the strong digging capability of the Sub-Dredge, production rates of up to 150 cubic yards of material an hour were achieved.   This compared to the average of 5 cubic yards achieved by divers, was a monumental improvement.   With material in the Bering Sea containing up to an ounce or more of gold per cubic yard, huge fortunes are possible with the proper equipment and mining knowledge.

The ability of the Sub-Dredge to travel up to 200 feet away from the power unit gave it a lot of maneuverability under the ice and limited the amount of dredging stoppage due to having to reposition all the equipment.   This was possible because of the 200 feet of hydraulic umbilical, which can be extended up to 400 feet.   With electric powered Sub-Dredges lengths of over 1000 feet are reached.

After 4-weeks of operation in Nome, Alaska, the Sub-Dredge can truly be seen as the new wave of the future in not only dredging but also underwater gold mining and will soon be seen by millions on the Discovery Channel!