Variable Frequency Drives, or VFDs, are pieces of equipment that changes the frequency of the power supply, allowing for exact and immediate adjustments to a pump’s operation.

Adding a variable frequency drive (VFD) to your pump can change it from a pump that operates at one speed (single flow rate) to a pump that can operate at variable speeds (range of flow rates) without the use of a gearbox or switching to a different electric motor.

Adding a VFD has other benefits besides throttling the flow rate. Adding a VFD can reduce a pump’s power consumption, decreasing the cost of operating a pump. This can amount to significant savings and lowers the cost of ownership. Another benefit of adding a VFD is that a pump can be fitted with other programmable pump control components like EDDY Smart Pump Technology which increases the flexibility of how the pump can be applied. Adding a VFD to an EDDY Pump increases the value the pump can provide and potentially reduces the cost of ownership over the lifecycle of the pump.

Looking for a VFD?

Let our sales or engineering support help in your dredging equipment selection.
Call 619-404-1916

What is a VFD?

VFD technology was developed in response to the limitations of AC power. AC motors, such as the ones powering industrial pumps, rotate at a rate set by the incoming power and the number of poles inside the motor. Since AC power in the US is supplied at a standard 60 Hz frequency, this means that standard single phase two-pole motors spin 60 times per second.

Adding more sets of poles reduces the speed without any need to alter the incoming electrical frequency. However, you can’t just swap out an electric motor with more or fewer poles every time you need to change the operating speed of a pump. Transistor systems that allow you to turn specific motor poles on and off have been available for decades, but these systems are complex and often lack the fine control needed for industrial pumping. Instead, <strong>VFD’s change the frequency</strong> of the power supply, allowing for exact and immediate adjustments to the pump operation.

The VFD works by taking in AC power at the 60 Hz frequency, converts it into direct current (DC) power through a rectifier circuit, and sends it through a DC bus to filter the voltage further. Then, power reaches the inverter which creates pulses of DC energy that function like AC current. The pulsing nature of the output mimics AC power enough to create the correct induction processes needed to spin the rotor of the motor. Since DC is easier to control in voltage and frequency, using it instead of true AC power allows the VFD to adjust the electrical supply on the fly. A series of transistors, especially the Insulated Gate, Bipolar Transistor (IGBT), give manual or automatic control over the power output and the resulting EDDY pump performance. Power is easily increased to a sludge pump under heavy load and then dropped again after a blockage passes or the texture of the slurry or sludge being pumped changes.

Why Do I Need a VFD?

A variable frequency drive (VFD) is used to control the speed of the slurry pump by adjusting the frequency of the electrical power supplied to the motor that drives the pump. This allows the operator to adjust the flow rate of the slurry being pumped, which can be useful in a variety of applications.

A slurry is a mixture of liquids and solids, and the viscosity and density of the mixture can vary depending on the specific application. In order to maintain a consistent flow rate and prevent damage to the pump, it is often necessary to adjust the speed of the pump. 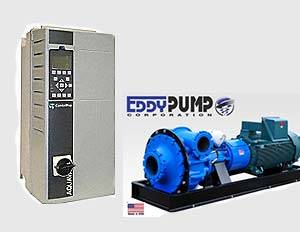 Benefits of Utilizing a VFD When Using a Slurry Pump

Pumping tough, abrasive slurries such as paper pulp or sewage is a challenging process due to high viscosity, the presence of large solids, and changes in viscosity. All of these issues can damage pumps that are only designed to run at a fixed speed and load. Sludges or other heavy material that need to be pumped when dredging or mining also cause similar issues. VFDs allow slurry pumps and their motors to adjust on the fly to changes in the material being pumped, preventing damage and ensuring the system is always running at maximum energy efficiency. Gaining variable speed control without costly programmable logic controllers is especially helpful during dewatering processes that require very slow processing speeds.

By utilizing the EDDY Smart Pump Technology, the VFD can be controlled on the fly using on-board smart chips and computers, requiring little to no input from pump operators, thus keeping the pump running optimally with maximum uptime and more profits.

Compatible with both indoor and outdoor applications and holds the least demanding rating for outdoor use. We produce top-quality metal enclosures in various types and materials. Our adherence to UL 508A standards will give you a quality weatherproof enclosure resistant to rain, ice, and snow.

Primarily intended for outdoor use and offer a superior level of protection from corrosion and extreme environments.

Let Us Answer Your Questions

Let our sales or engineering support help in your dredging equipment selection.
Call 619-404-1916
Contact Us