Need to know terms of dredging and pump talk. Education Series and Common Terms Clients Use. Browse Our Slurry PumpsContact Us For Fast Quote

Keywords you should know when you talk pumps with your friends BBQing this weekend.

Auger Dredge – Auger dredges incorporate an archimedean type screw which is set at 90-degree angles to the suction pipe of a dredge. The auger acts like a wide, low-turbidity cutterhead in mechanically breaking up the target material and feeding the pump.

Best Efficiency Point (BEP) – An operating region or point along the PPC at which the rate of flow of a pump operates at the highest or optimum efficiency for a given speed and impeller diameter.

Brake HorsePower (BHP) – The measure of the force needed to brake the engine, the available power of an engine.

Booster Pump – Surface pump used to increase or boost the pressure in a liquid pipeline.

Cavitation – The formation of air pockets or cavities in liquid, occurs in areas of relatively low pressure around the impeller.

Close Coupled – A pump in which the impeller mounts directly to the pump drive shaft.

Critical Line Velocity – The minimum rate of flow needed to keep material turbulent enough to prevent material from settling at the bottom of the discharge pipeline, potentially leading to clogging.

Cutterhead – The rotating tool attached to the end of a dredge pump. Equipped with cutting teeth to help agitate and break up densely-packed sediment for feeding the pump.

Density – The density of a liquid is defined as its mass per a set unit of volume, usually pounds per gallon. Different liquids have different densities: a gallon of water weighs more than a gallon of gasoline.

Dewatering – The act of removing or displacing groundwater or surface water from a work site, most often by directly pumping or utilizing gravity.

Flooded Suction – Suction pump chamber that is full of liquid because of the liquid level and pressure in the suction tank.

Flow – The measured liquid volume capacity of a pump, often expressed in gallons per minute(gpm).

Head – The measured height at which a pump can raise water. Specifically the head discharge. The energy of a liquid in reference to an arbitrary datum that is expressed in units of energy per unit weight of liquid.

HPU (Hydraulic Power Unit) – The main driving component of any hydraulic system. Comprised of a motor, a hydraulic pump, and a reservoir. Capable of producing immense power for industrial pumps and dredges.

Impeller – The rotor located inside the case of a pump. This has the purpose of increasing or decreasing the pressure and flow rate of a fluid. The recessed impeller and unique design of the EDDY Pump is what makes our pump excel while moving solids/slurry.

Pipe Friction Loss – The loss of pressure or head that occurs in a pipe. This is due to the effect of the fluid’s viscosity near the surface of the pipe.

Pressure Drop – A difference in pressure due to a pressure decrease. Also it is the loss of potential energy where typically there is friction(‘heat’) of the fluid due to flow disturbance.

Pressure – The force a liquid exerted on the walls of a container, such as a tank or pump pipe. Pressure is typically measured as PSI (pounds per square inch) in the USA. The metric system, however, measures pressure in bars, where one bar equals a standard atmosphere.

Priming – The act of removing air from the volute by filling it with liquid.

Pump Curve – Typically a plot such as total head vs. flow rate. The plot is used to determine the total head of a pump when given the flow rate of the pump.

Radial Flow – Where the fluid being pumped by a centrifugal pump is discharged radially or at right angles to the pump shaft.

Self-priming Pump – A centrifugal pump which integrates a vacuum-based priming unit which removes the air from the pipeline and volute. This allows the pump to fully operate without manually priming the pump.

Sediment – Fragmented, naturally occuring material such as silt, sand, and gravel found settled at the bottom of a body of water or other liquid.

Slurry – A semiliquid mixuture, often composed of abrasives like cement, sand, or coal ash suspended in a liquid such as oil or water.

Smart Pump – A smart pump can connect to other devices to both operate the pumps and to receive diagnostic information related to the performance of the pump.

Soft Start – A device used with electrical motors to temporarily reduce the load and torque in the powertrain and electric current surge of the motor during start-up to help extend the life of the motor.

Total Dynamic Head – The sum of the discharge head, suction head and friction loss in a pump. Total head is also defined as the work done by the pump per unit weight, per unit volume of fluid.

Viscosity – A measure of the response(resistance) to gradual deformation through stress. Liquid viscosity corresponds to the ‘thickness’ of the medium.

Volute – The casing of the centrifugal pump or and EDDY Pump that receives the fluid being pumped by the impeller, and slowing down the fluid’s flow rate.

Best Efficiency Point (BEP) – An operating region or point along the PPC at which the rate of flow of a pump operates at the highest or optimum efficiency for a given speed and impeller diameter. 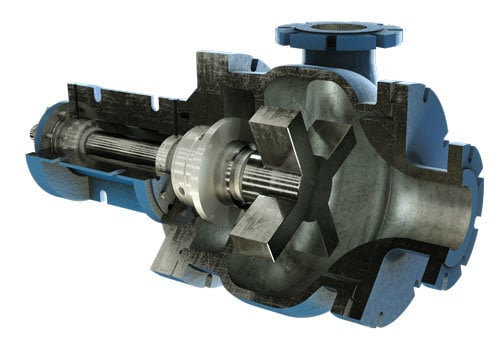 A look inside the EDDY Pump 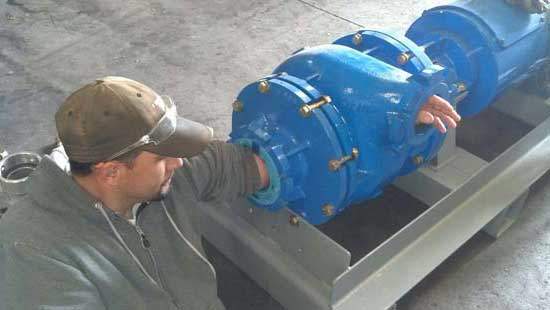 Let our sales or engineering support help in your slurry pump and dredge equipment selection. Call (619) 258-7020
Contact Us Here