Dow Chemical Canada decided to be proactive and find a way to clean up some 3,000-ft. of their shoreline on the St. Clair River. Many technologies were analyzed and a few were tried but with limited success. Dow then contracted URS Corporation to help them come up with a solution to their complex problem. URS contacted EDDY Pump (TM Technologies) and presented the problem. The requirements of the job were extremely challenging and would involve engineering and constructing custom-designed equipment. The contaminated sediment was spread over a very uneven underwater landscape with large slopes up to 45 degrees. The layers of contaminants ranged from 3-in to over 9-ft. in depth and were resting on top of soft highly plastic clay. That meant the goal was to develop a dredge utilizing the EDDY Pump that could run parallel to the shore and be capable of removing the contaminated layer of material only and not the soft clay substrate. 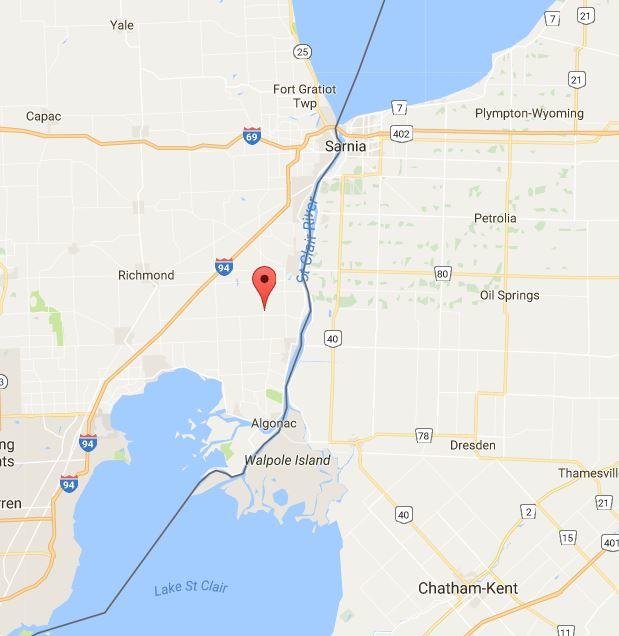 The St. Clair River is a 40.5-mile-long river in central North America which drains Lake Huron into Lake St Clair, forming part of the international boundary between the Canadian province of Ontario and the U.S. state of Michigan.

In the past, this particular Project site had been part of a targeted Remedial Action Plan (RAP) shared by Canada and the United States that was identified as one of (42) Areas of Concern AOC) in the Great Lakes Region. Plans to remove the contaminated sediments were then approved by Environment Canada and the Ontario Ministry of Environment (OMOE) and a Certificate of Approval was issued for the work to be done. The removal of the sediment from the river bottom occurred in three separate phases between May of 2002 and December 2004.

The conditions that existed at this industrial site have been documented since the 1950’s and as a result of past historical activities, toxic pollutants became fixed into the sediments that existed offshore. In an area approximately 375,000 sq. ft. sediments containing metals, chlorinated organics and free-phase organic chemicals such as mercury, cadmium, lead, Hexachlorobenzene(HBC), Hexachlorobutidiene(HCBC), Octachlorostyrene, Carbon Tetrachloride and Perchloroethylene had been dumped from an outfall area at the north end of the property. Here, the dredge encountered face cuts over 9-ft. high and a 3-6in layer of Calcium Carbonate to punch through in order to remove those sediments deposited previously and trapped beneath it. 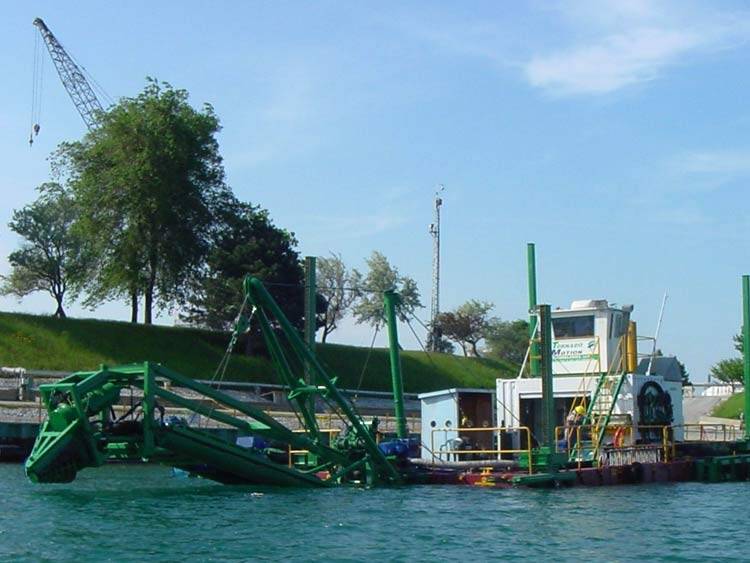 EDDY Pump (formerly TM Technologies) came highly recommended to create and build a dredge that could transfer sediment from the river bottom to a holding pond using its patented pumping system. The ability of the pump to move solids of 30- 80% through 3,500-ft. of conveyance pipe up a 70-ft. rise to the pond while being able to maintain 1900-2000 gpm made the Tornado II dredge well suited for the unique conditions present at the St. Clair River site. This dredge was engineered to pump solids in 2-30ft. of water and designed with an articulated head to surgically remove toxic sediments in/around confined spaces. At the same time it adjusts to the ever-changing contours of the river bottom and delivers a level cut leaving behind only guard marks in the clay.

The dredging operations effectively removed 98-100% of the depositional sediment that amounted to a combined total of 28,000 cu. yards of material over the (3) phase period before flocculants and polymers were added at the pond. While environmental buckets may be an answer for some toxic applications, the puddles of Perchloroethylene on the bottom would have gone down river and not to the pond for safekeeping.

An extensive environmental monitoring program to evaluate the impact of the dredging operations on downstream water quality was administered and upheld by the OMOE. Turbidity monitoring at the dredge head and at 75-ft. downstream from the dredge along with periodic water sampling for chemical constituents and total suspended solids (TSS) proved a healthy regime in protecting and preserving the quality of drinking water.

Dredging contaminated sediments for environmental improvement has moved from a limited success status to that of absolute success. Tornado Motion’s proven technology has already impacted future generations. EDDY Pump (TM Technologies) has taken great strides to help move the St. Clair River towards being de-listed as a Great Lakes Areas of Concern. Now, the environmental “wish list” has been reduced by one. Download PDF Here.

Call with any questions you may have.

If you need help with Pump Selection, Sales or Engineering Support, Call 619-404-1916.
Contact Us Here