During oil spills, up to 10-30% of the oil becomes absorbed on the suspended material and then deposited on the ocean floor. This process mainly is subjugated to narrow coastal zones and shallow waters where water is subjected to heavy mixing. This subsurface oil generates a greater concern than surface oil due to its characteristics of remaining dormant for many years before being dispersed. This contaminant is then more liquid, still highly toxic, and may become biologically available. Conventional technology continually falls short in its ability to remove the oil in an environmentally friendly manner, while still being time and cost-efficient. EDDY Pump Corporation has recently found a solution to this problem through its new remotely operated submersible dredge (Sub-Dredge). 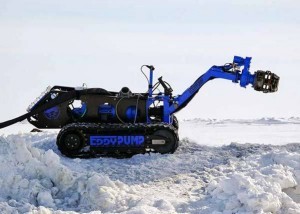 Environmental consciousness is of utmost importance when dealing with the removal of spilled oil.  Conventional removal technology continually creates a large ecological disturbance through its turbidity, over dredging, and leftover residuals. EDDY Pump Corporation answered these concerns through much engineering design on the Sub-Dredge.  By implementing a turbidity shroud along with the powerful suction of the Eddy Pump, an almost undetectable turbidity level is achieved.

Furthermore, with its ability to monitor down pressure, the Sub-Dredge is able to prevent over-dredging into the virgin material.  The conical shape of the head creates a flat contact with the ground creating virtually zero residuals left behind.  This is unlike other technology which incorporates a basket-shaped head that leaves windrows of leftover contaminants.

With time and cost efficiency being of monumental importance in sub-surface oil removal, high production rates coupled with high percent solids lead directly to cost savings.  The patented 6-inch Eddy Pump found on the Sub-Dredge which incorporates a hydro-dynamically built volute along with a precision-engineered geometric rotor allows for such efficiency.   This design enables the Sub-Dredge to pump solids at a rate of 300-350 cubic yards per hour while maintaining percent solids as high as 60-80% in-situ.

EDDY Pump’s Subdredge is truly unique, meeting the demands of today’s sub-surface oil recovery.  Its ability to operate while creating little to no environmental impacts while still being time and cost-efficient places it at unparallel levels in the field of oil recovery.